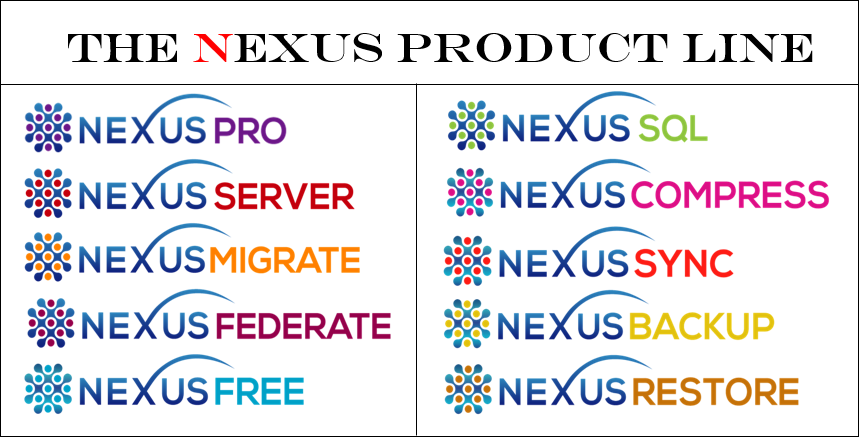 The two concepts in our Big Data vision is the user’s desktop and the database server.  The Nexus desktop allows a user to access any data, at any time, anywhere from their desktop or laptop, no matter whether they are at the office, a coffee shop, or home.  The Nexus Server sits in between the many different database platforms, both on-premises and on every cloud, and manages and controls the data movement between systems.  Users use the desktop to build anything and everything, but they have the option to run it from their desktop or the Server.

The reason this is the perfect design is that on many occasions, such as when data is relatively small, the user’s desktop should query and combine data between systems.  However, when information is astronomical, or the user’s location isn’t ideal, the Server should run the tasks for the user using the user’s credentials.  This theory is like having a mass transportation system, a highway system, and the city and rural roads.  Each transportation system has a place and purpose.

We start at the desktop with Nexus SQL.  It is challenging to build a query tool for a single database platform, but to build one that works across all systems is an artwork.  Users can query every database simultaneously, and that includes Excel worksheets.  Having this capability at every user’s desktop is a fundamental right. Still, when queries are significant, or you want to schedule a question on a global calendar, the Nexus SQL can be run on the Nexus Server.  You can have the Server return the answer set to your desktop, to a file, or have it create a table on any system.  The user PC or laptop does not have to be on, and yet the job gets done.

Being able to run SQL on any system is nice, but why not let the tool write the SQL for you?  What separates the Nexus Product Line from all other systems is the Nexus Super Join Builder.  The Super Join Builder shows the user tables and views graphically, and even displays what tables and views can join.  All the user has to do is click on the columns they want on their report, and Nexus builds the SQL automatically.

Having the SQL built automatically is a dream, but the ability to join tables from different systems automatically is nearly impossible.  Nexus Federate creates the SQL, data conversions, and automates the data movement for cross-system joins/federated queries.  Users point-and-click on tables across platforms, choose the columns they want on their report, and Nexus delivers the answer set.  This architectural phenomenon gets even better because the user can perform this function from their desktop or schedule it to run on the Nexus Server.

The ability to join tables across systems comes from the ability to move data with the touch of a button.  Nexus Migrate is so easy that every user can transfer data to and from any system in seconds.  What is equally as brilliant is that a companies data migration ETL staff can use Nexus to migrate data to the cloud or move data between systems in their nightly batch process.  How good is Nexus Migrate?  A fortune 100 company was using Amazon’s Data Migration Servers (DMS) to migrate their data to the cloud, but they switched to Nexus because they needed better speeds and reliability.  And of course, Nexus Migrate works on the user’s desktop for smaller data into their sandbox, but when a professional high-speed transfer is needed, it runs on the Server.

Having the ability to access any data, at any time, anywhere can be overwhelming.  How can you find the data that you need?  The Nexus Cache Tree is the perfect solution.  The Nexus desktop and the Nexus Server can poll every system to collect metadata information and store it in memory (cache).  The user can search for any names, such as “customer_number,” and the Nexus Cache Tree shows a new system tree with the table and column where “customer_number” resides.  Partial names, such as “cust” can search as well, so every system, database, and table where “cust,” such as “customer,” resides, is displayed in a universal system tree.  What is astounding about the new tree view is that it is a live tree.  Users can see the table, column, and data type, but they can also query, move the table, or run federated queries across every platform  With the Nexus Cache Tree, a table or column is never lost.

With all of this intelligence packed into a desktop and server combination, you might be wondering if Nexus is a software solution or a database.  The Nexus is the world’s most comprehensive software solution, but we gave the Nexus database capabilities.  The Nexus Dashboard can take answer sets and build analytics, pivoting, spreadsheet capabilities, and graph and chart dashboards inside the user’s PC.  Data is data, so why does it only have to be queried from the database when the Nexus can do it for you even faster.  The key to accessing any data, at any time, anywhere is useless unless the tool can quickly provide meaning through analytic reports and visual aids.

How can all of these features be inside one product line?  The answer is vision, experience, and 20-years of development.  Why not experience the future of computing yourself, save a ton of money, and make a lot of money with Nexus.  We will set you up with the Nexus desktop and a Nexus server so you can see how easy and inexpensive it is to migrate your data to the cloud or perform federated queries across all systems.

Tom Coffing, better known as Tera-Tom, is the founder of Coffing Data Warehousing where he has been CEO for the past 25 years. Tom has written over 75 books on all aspects of Teradata, Netezza, Yellowbrick, Snowflake, Redshift, Aurora, Vertica, SQL Server, and Greenplum.  Tom has taught over 1,000 classes worldwide, and he is the designer of the Nexus Product Line. 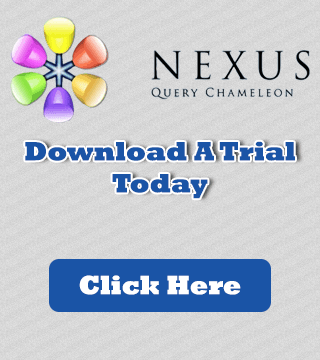